Hi, I’m Shawn Ng, one of the co-founders of The Vegetable Co and this is a story of our journey during the Movement Control Order (MCO).

The Vegetable Co. is a budding start-up which harvests fresh salad leaves from our farm within the day and delivers them to households that desire nutritious, pesticide-free vegetables. We began operations at the end of February, and on the 18th of March, the MCO began due to the corona virus.

This article will comprise our experiences during this unique, restrictive period in Malaysia, which may be drastically different from many people’s experience. Now that we are close to the end of the Recovery Movement Control Order (RMCO), it seemed a good time for reflections on the state of matters over the past few months. 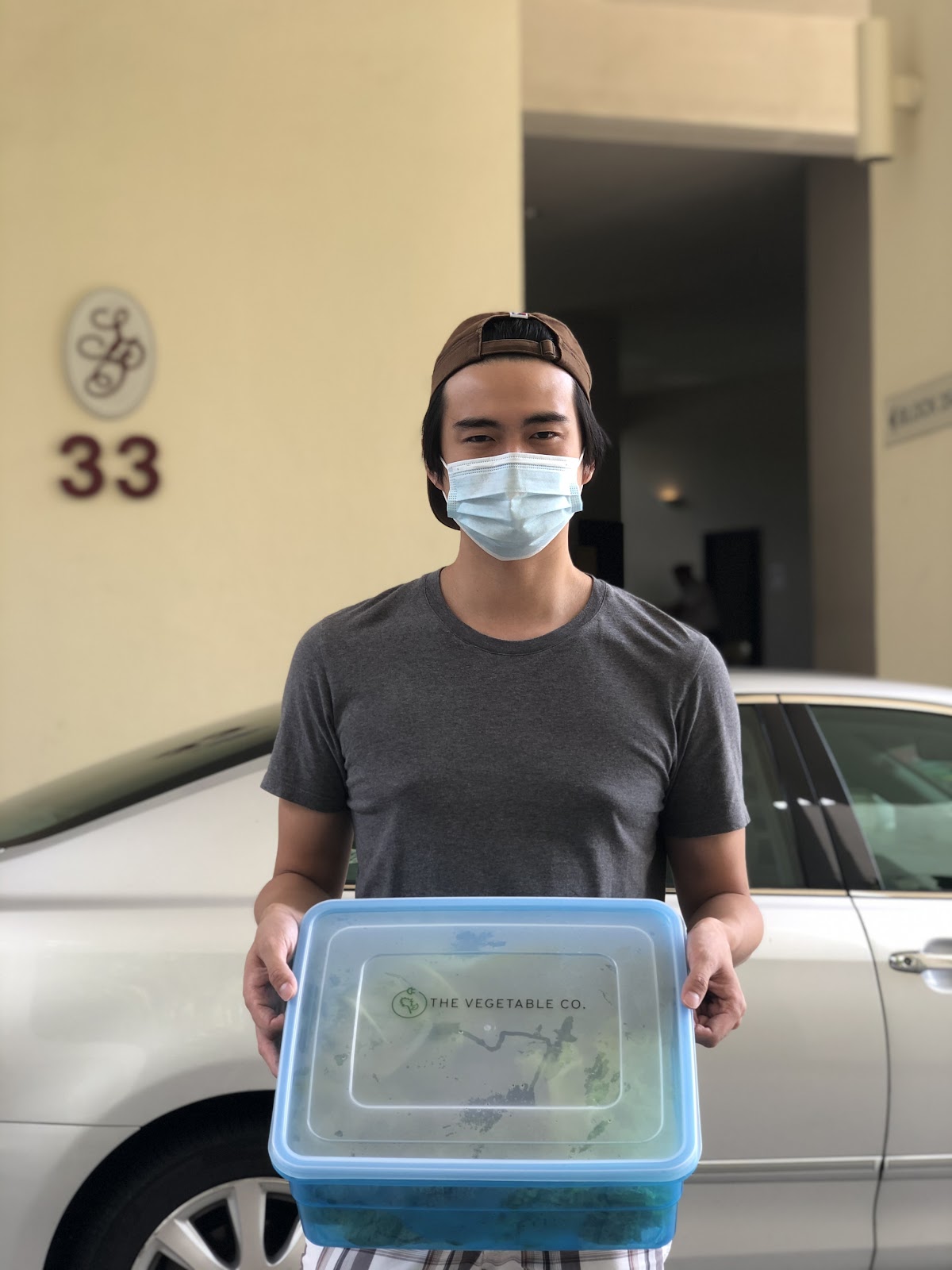 The MCO was an alarming shock to many of us within Malaysia at the time. Prior to that, the COVID-19 virus was nothing more than faraway news, a pandemic causing chaos in countries such as China, Italy and Iran. Although cases were reported within the country, there was an overall lull as we considered the virus an inconsequential anomaly, rather than a full-fledged pandemic that we now come to know of.

Thus, when the MCO was first announced by the Government of Malaysia, many of us were nigh prepared for the lockdown that was to come. Uncertainty swept many within the nation on the first few days – manifested through the unrestrained panic buying that rippled through the 13 Malaysian states. Bread became a scarcity, shelves were swept clean across supermarket aisle, and for some strange reason, toilet paper hoarding became an occurrence. Luckily, this hysteria subsided gradually as we realised that daily necessities were in healthy supply.

Call it a stroke of luck or a speck of light during grey times, but the business grew exponentially during the initial stages of the MCO. Vegetable supplies were low in the supermarket aisle, and food scarcity hung warily over everyone’s head. The pandemic provided us thus with a window to provide fresh vegetables while giving consumers time to taste the difference in comparison to what is out there in the market. Some of our loyal following came during the pandemic, and we are always thankful to those initial supporters.

The pandemic also opened a new horizon for us. Being food providers, we were given the opportunity to travel across Klang Valley with minor restrictions. As our farm is located in Puncak Alam, we also travelled much on the North-South highway out of Kuala Lumpur.

We travelled every single day during the pandemic – a rare feat not many can claim. As we went about daily from farm to delivery locations, we were gifted incredible perspectives that were way beyond the normal way of things. 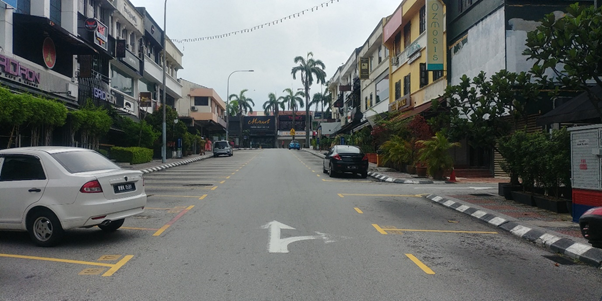 (The usually busy streets of Jalan Telawi looks desolate for a change.)

For me, the act of travelling itself remained amongst the most surreal of experiences: the roads were barren and the various townships I passed by were eerily quiet. It was akin to post-war apocalypses in the movies, where not one person was in sight. As such, going across state borders was always an amusing sight, as there would be traffic jams at the toll-booth check-points due to interstate restrictions. But beyond these checkpoints, the roads were basically empty, creating a strong juxtaposition in the driving experience.

Over time, the empty roads became an introspective experience, as I immersed myself in thoughts due to a lack of distractions on the roads. Cruising down the Federal Highway with not one car in sight remains one of the most spectacular experiences for me to date.

Before we move on, The Vegetable Co. would like to highlight the splendid work done by the police and military during the MCO period. They did an excellent job maintaining order, and remained a reassuring presence, regardless of the pouring rain or the intense March-April sun.

The increased hygiene of the MCO period was another significant axis of change. The COVID-19 virus had everyone on high alert with regards to sanitation, and the various protocols necessary during the period was an avenue of stress and wariness. Handwashing and clothes washing became a daily occurrence and people generally tried to respect the 1-metre social distancing guideline provided by the government.

As a fresh vegetable provider, The Vegetable Co. saw that it had a moral duty to uphold the highest standard in food hygiene, especially considering our civil responsibility to minimise our potential as virus carriers. Luckily, our farm operations already have relatively high Standard Operating Procedures (SOP) with regards to hygiene and it was only a matter of transposing those practices outwards. This good practice came in handy when there was a shortage of face masks and PPE gloves, as we had an abundant supply within our farm at the time.

Similar standards were also maintained when we did our deliveries. Throughout the MCO, the team always used  separate cars to minimise contact, and bottles of hand sanitisers were always present within. Key contact points within the cars were sterilised frequently, and face masks were worn the moment we left our houses.

During the initial stages, customer interactions were minimal. Boxes were left on walls, verandas, tables, et cetera, and a minimal distance was usually respected between parties. Over time though, as the MCO situation relaxed, so did our customers. Small engagements were had whenever we exchanged boxes, and to be honest, it was something I sorely missed. Engagements with customers were always a source of joy for me, and the cold reactions resulting from the MCO disheartened me at times.

Humans are social creatures at heart, and this was reflected in the various engagements I experienced over this period. Although people managed to fill their time with new hobbies or interactions through video conferences, people sorely missed direct human interactions and every little conversation we had helped brighten each other’s days a little.

This lack of interaction also dampened the Ramadhan and Raya period, which unfortunately coincided with the height of the MCO. A period that is usually synonymous with unity and bonding was replaced with a period of isolation and quarantine. The usual post-fast gatherings at the mosque, hustle and bustle of the Ramadhan Bazaars, as well as the merry open houses of Hari Raya were replaced by online meetings and video conferences with family members.

This festive season went by as a muted affair, a dampener for most of our Muslim friends and colleagues. The Hari Raya cookies, rendang and lemang do not have the same flavours when it is not shared with a large crowd of friends and family.

The MCO period has brought about a new normal for many of us, and the way in which we carried out our daily lives has altered significantly within this period. Hygiene has become fundamental practice, and the way we view interpersonal relationships has changed a lot.

Nonetheless, we have all come out of this pandemic stronger and kinder. The emergence of the hashtag #kitajagakita (we take care of our own) really seemed to embody Malaysia’s outlook during the MCO. As although we were far apart physically, we did everything within our power to reach out to one another – aiding the needy in the process. Personally, this gives me bright hope for the country. As we come out of the chaos and into some semblance of order, we here at The Vegetable Co. believe Malaysia will pick herself out of the rubble, brush it off and continue moving forward. In the meanwhile, our humble company would come along for the journey, taking it one accelerator pedal at a time.